There is little doubt that poor maintenance does more damage to outboard motors than high usage, and failure to properly winterise an outboard motor can result in serious, possibly terminal damage. So, how do you go about winterising an outboard motor?

Modern fuels do not store well, even petrol for 4-stroke engines cannot now be left untreated in the tank over winter, so the first job is to add a fuel stabilizer to the petrol. (In truth, it’s probably good idea these days to use a fuel stabilizer at every fill-up, all year round!) For 2 stroke engines, while the engine is idling, spray fogging oil into the carburetor. This will coat the inside of the engine in a protective film of oil and will help to protect parts such as the big ends. This job is harder than it sounds, the throttle will need to be increased as you spray the fogging oil to prevent the engine from stalling and you will ideally run the carburetor out of petrol just as you finish fogging.

For 4-stroke engines add 2-stroke oil to the tank at the ratio of one part oil to 100 parts petrol. This will leave a protective film of oil around such parts as the cylinders and valves. This is better than using fogging oil squirted in through the spark plug hole, as advised in most outboard handbooks, as fogging oil is unlikely to coat all-round the cylinder and will probably not get to the valves.

All outboard motor manufacturers recommend flushing their engines with clean water after each saltwater use to avoid internal corrosion of the engine’s aluminum waterways. The truth is, not everyone flushes their engine after every trip, but leaving it with corroding salt inside its waterways, over the long winter months, is really asking for trouble! For this reason, the next step is to flush the outboard through with fresh water. (Treating the fuel before flushing the engine serves to put a protective layer of fogging oil or 2-stroke oil inside the cylinders and around the valves etc.)

Don’t tilt the Outboard Up

One of the great features of an outboard motor is that it’s self-draining, but it’s only self-draining when it’s in a vertical position. If you tow the boat home on its trailer with the engine tilted up and then forget to lower it before storage, any water left in the engine will freeze and could cause damage. Another problematic possibility is that snow or raining water can collect in the barrel of the prop and migrate down into the exhaust passages of the gear case. Eventually it gets really cold one night and… POP! Your gear case is cracked. Of course, this couldn't happen since you wrapped your motor in plastic and sealed it with duct tape… never mind. 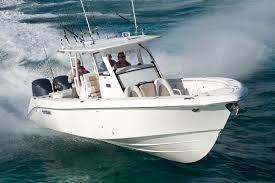 If the boat is stored outdoors, you might as well put a sign next to it that reads: “Steal My Propeller.” Besides, you’ll want to pull that prop so you can check the shaft for wrapped-up fishing line and remove it before it cuts through the prop-shaft seal and lets water into your gear case.

I know your outboard sounds really cool when you start it up on the trailer, but there's no reason to start the engine without first attaching a supply of water – as per the instructions in your owner’s manual. Remember: your outboard is self-draining. Starting the engine to “blow out the water” even for just a few seconds can seriously degrade or destroy your water pump impeller, which relies on water for lubrication. If you really can't go without hearing that noise, get yourself a ride-on lawn mower. They're usually air-cooled!