How does an outboard motor work?

Open up an outboard and this—hugely simplified—is what you'll find inside: 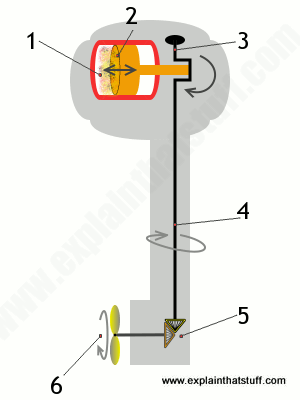 1.Fuel burns in the cylinder (or cylinders) to make power. There's a fuel tank (not shown) inside the case of the motor at the top, big enough to hold perhaps 23 liters (6 gallons) of gas. The heavier your boat, the faster you drive it, the choppier the water, the more heavily loaded, or the lower in the water it sits, the more fuel you'll burn.

2.Powered by the burning and expanding fuel gases, a piston moves back and forth in the cylinder. This is just like the piston in a car-engine cylinder and often works through the same four-step process (four-stroke cycle), although some outboards do use a simpler two-stroke cycle.

3.The piston rod turns the crankshaft, converting the back-and-forth (reciprocating) motion of the piston into round-and-round (rotary) motion.

4.The crankshaft turns the main driveshaft running down the long spine of the motor.

6.The propeller powered by horizontally spinning gears powers the boat through the water. 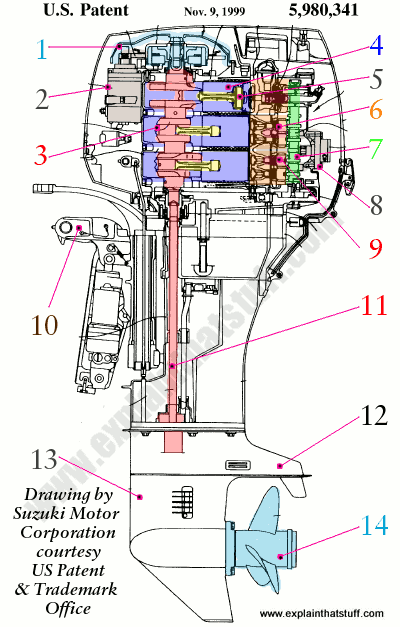 The very simplified illustration up above is designed to show you the basic operating principle of an outboard motor; real motors are somewhat more complex than this! Here's a very clear cutaway illustration prepared by Suzuki Motor Corporation for a patent application they were granted in 1999 for a new design. I've colored it and greatly simplified the numbering so you can make sense of it more easily; if you want to know all the details, check out the patent, where you'll find more drawings of the same engine. Here a few of the parts that are worth noting:

1.Flywheel (blue): A heavy wheel that builds up momentum as the engine accelerates, helping to maintain a smooth and steady engine speed.

2.Starter motor (grey): Normally you'd start an outboard motor electrically, just as you'd start a car. If that's not possible, you can attach a pull cord to the flywheel and tug it vigorously to "crank" the motor into life. There's a special notch in the flywheel where you attach the cord. (Find out more about flywheels.)

3.Crankshaft (red): Collects power from the engine pistons, which fire slightly out of step to keep the motor running at a steady speed

4.Cylinders (blue): This motor has three cylinders arranged horizontally. A medium-sized, three-cylinder outboard like this produces something like 40–50 horsepower. It's a fairly hefty machine, weighing in at 86kg (190lb)—almost the exact average weight of an American adult male!

5.Pistons (yellow): Move back and forth in the cylinders, driven by the energy released from burning fuel, and transferring that energy to the crankshaft.

6.Carburetors (orange): Three separate carburetors combine fuel with air to make an explosive mixture—there's one for each cylinder.

7.Camshaft (green): Opens and closes cylinder valves that let fuel in and exhaust gas out.

9.Sparking plugs (red): ignite the fuel in the cylinders.

10.Mounting bracket: Where the motor attaches to the back of the boat and swivels up and down.

11.Driveshaft: Carries power from the crankshaft down to the gears. Think of it as a kind of "spinning spine," running straight down through the center of the motor linking the cylinders at the top to the gears and propeller at the bottom.

12.Anti-ventilation/cavitation plate: Cavitation is what happens when a spinning propeller churns up air or engine exhaust gas in the water. Bubbles form and burst, which, over time, wear away the propeller's surface. The anti-cavitation plate is designed to reduce that problem, but cavitation can still be caused by floating debris disrupting the smooth flow of water around the propeller blades.

13.Gear unit: The gears (not shown) are inside here.